Imagine you have a subdirectory of generated files and you want to store them into Git as a standalone (orphan) branch. For example, you have generated html files and associated CSS and JavaScript assets, with the intention of publishing them as a GitHub Pages site from the gh-pages Git branch of the project. Git’s plumbing commands allow automating storing the generated files into the gh-pages branch, recreating the branch each time you publish. Here’s a Bash oneliner to do that:

Let’s go over the parts of the command list.

I’ll use the --force switch to allow Git to add ignored files.

2. Create a Git tree object from the current index

A Git tree object groups Git objects and stores the paths of the objects. The tree object will be used to create a commit object in the next step.

The command prints the name of the tree object to stdout (I’ll use the $tree shell variable for that in the next step).

3. Create a Git commit object from the tree object

The command prints the commit object id to stdout (let’s put it into the $commit variable).

4. Set a branch to refer to the commit object

This overwrites the gh-pages branch, if it exists already.

5. Reset index to the current HEAD

This needs to be done for clearing the index.

Now the target branch, gh-pages, contains a single orphaned commit, using the build subdirectory as the root directory of the files.

If you want to, you can store the previous commit of the gh-pages branch as the parent of the next commit, but then there are edge cases to consider: you’ll need to detect if the target branch exists already and whether the new contents of the build directory differ between the next and the previous commit (it doesn’t make sense to create a new commit with an empty diff compared to the parent commit). Covering them would require elaborate scripting compared to the Bash oneliner I went through.

As a real example, the Hacker’s Tiny Slide Deck project uses this trick in storing the generated slides (an html file) and the JavaScript bundle of the project into the gh-pages branch of the project, from where GitHub Pages publishes them. The relevant Git commands are in package.json.

Here’s a screenshot of GitUp app’s map view of the Git repository of Hacker’s Tiny Slide Deck, showing what the standalone gh-pages branch looks like: 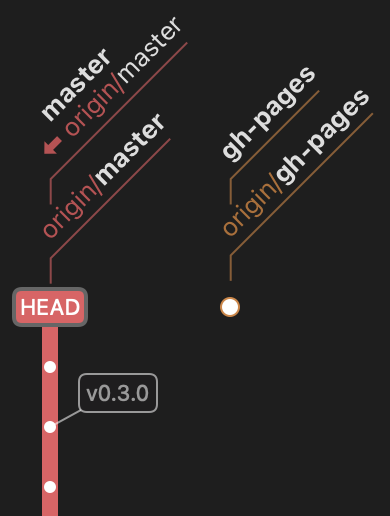 The chapter titled Git Objects from the Pro Git book is a great resource for learning more about Git internals.